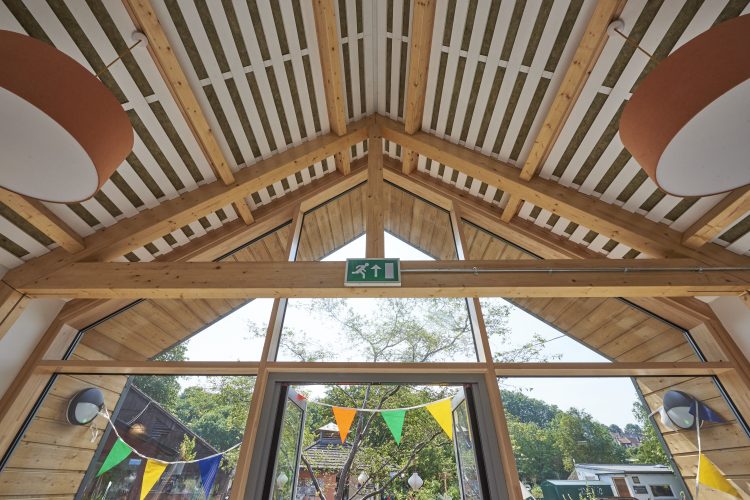 The Windmill Hill City Farm café has been enjoyed by many so RISE is proud to take part in its renovation and extension. This provides additional seating areas as well as function rooms, utility rooms, and office space at the back.

The café is a double-height single-storey building with a new duo-pitched roof formed by a double-height glued laminated timber (‘glulam’) frame creating a light, open space.

To provide stability to the building, walls or bracing could have been used, ruining the open space. Instead, RISE designed the glulam frames with moment connections, forming portalised frames. To achieve the right look, careful consideration was needed for the proportions of the columns and beams that form the frames. The bespoke connections for the frames is using steel dowels instead of chunky standard bolts, providing a subtle result in keeping with the light, open look.

The overhang at the front gable is achieved with hidden straps rather than heavy cantilevering beams or columns, allowing the public to connect with uninterrupted views of the farm while they enjoy a cappuccino.

The site was originally occupied by Victorian houses which  were demolished, leaving an extensive thickness of rubble on the site. Typically, piling would have been specified for the foundation, making the extension financially prohibitive. By doing a ground-bearing test on the made-up ground, RISE could prove that concrete strip foundations bearing at 1.2m in the made-up ground were satisfactory. Through this ingenuity, RISE made the project possible.